A Christmas message from Steve Jobs for our friends in pharma: 2015 version 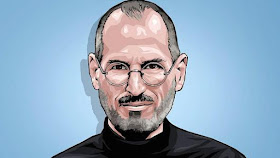 I had posted this at the end of 2011, and it's both fascinating and highly disconcerting at the same time that Steve Jobs's lament about product designers' focus on sales instead of product design leading to the decline of specific industries rings even more true for pharma in 2015 than it did in 2011. If anything, the string of mergers and layoffs in Big Pharma during the last four years have underscored even more what happens when an industry starts to worry more about perception and short-term shareholder value than its core reason for existence. Most would agree that that's not how you innovate and that's not how you solve the really hard problems. Let's hope Steve will have a different message for us in 2019.

I am at the end of Walter Isaacson's excellent biography of Steve Jobs and it's worth a read even if you think you know a lot about the man. Love him or hate him, it's hard to deny that Jobs was one of those who disturbed our universe in the last few decades. You can accuse him of a lot of things, but not of being a lackluster innovator or product designer.

The last chapter titled "Legacy" has a distillation of Jobs's words about innovation, creativity and the key to productive, sustainable companies. In that chapter I found this:

"I have my own theory about why decline happens at companies like IBM or Microsoft. The company does a great job, innovates and becomes a monopoly or close to it in some field, and then the quality of product becomes less important. The company starts valuing the great salesmen, because they're the ones who can move the needle on revenues, not the product engineers and designers. So the salespeople end up running the company. John Akers at IBM was a smart, eloquent, fantastic salesperson but he didn't know anything about product. The same thing happened at Xerox. When the sales guys run the company, the product guys don't matter so much, and a lot of them just turn off."

Jobs could be speaking about the modern pharmaceutical industry. There the "product designers" are the scientists of course. Although many factors have been responsible for the decline of innovation in modern pharma, one of the variables that strongly correlates is the replacement of product designers at the helm by salespeople and lawyers beginning roughly in the early 90s.

There's a profound lesson in there somewhere. Not that wishes come true, but it's Christmas, and while we don't have the freedom to innovate, hold a stable job and work on what really matters, we do have the freedom to wish. So with this generous dose of wishful thinking, I wish you all a Merry Christmas.
Wavefunction on Sunday, December 27, 2015