On Albert Einstein's birthday: How Eddington and Einstein set an example for the international fellowship of science 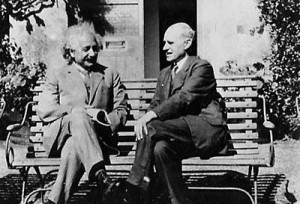 The world woke up on the morning of November 7, 1919, to an amazing piece of news. A few months before in May, the English astronomer Arthur Eddington had led an expedition to the island of Principe off the west coast of Africa to try to observe one of the strangest phenomena ever predicted in the history of the science: the bending of starlight by the gravitational field of the sun. The phenomena could only be observed during a total solar eclipse, when the sun becomes dim enough to track the passage of starlight past it.

Eddington’s analysis proved that the light was bent by an amount that was twice that predicted by Isaac Newton, often considered the greatest scientist who ever lived. The man who trumped the great Sir Isaac’s prediction had until then been a relatively unknown forty-year-old physicist working in Berlin. His name was Albert Einstein, born on this day in 1879.

The observation of starlight bending was the first prediction of Einstein’s then otherworldly-seeming general theory of relativity: “One of the greatest achievements in the history of human thought. It is not the discovery of an outlying island but of a whole new continent of scientific ideas”, quipped the English physicist J. J. Thomson, discoverer of the electron. It was only the first among a stellar set of experimental observations that validated some mind-bending phenomena and ideas: spacetime curvature, black holes, gravitational waves, an expanding universe. It catapulted Einstein to world celebrity, and made him a household name and a part of the history books.

More importantly for the sake of world peace, however, it underscored one of the finest moments in the history of science diplomacy. The world had seen its first brutal world war end just a few months before, when the guns had finally been silenced in August.  The carnage had been unparalleled: more than 38 million casualties, with 17 million deaths. And in the light of this death and destruction, there was one country on which the world’s anger was focused: Germany. It seemed Germany had started the war and continued it, and it was fanatic German militarism that seemed to have sown the seeds of discontent.

In the middle of all that resentment then, it must not have gone unnoticed that an Englishman had confirmed a seminal prediction of a German’s reworkings of our understanding of the cosmos. In fact it was an exceptional gesture that would go down in history as a measure of the international brotherhood of science. Eddington, a pacifist Quaker who loathed war, joined heart and mind with Einstein, another pacifist who loathed war. At a time when the two countries had just come out of a horrific conflict with each other – a conflict streaked with memories of poison gas, trench warfare, dysentery and hand-to-hand combat - here was singular proof that there could be friendship between them again, that it was possible to forgive and move ahead together. The expedition at Principe confirmed a singular fact about science: that it can go beyond petty and deadly territorial disputes, that its bonds go deeper than those of rank or politics, and that, in the hands of men and women with conscience, it can rise above the fray and be the one shining candle in the dark. Einstein never forgot Eddington’s contribution to relativity and the hand of fellowship that bridged two nations who only a few months before had been sworn enemies. At the end of November, he finally gave in to the constant pleas from journalists and the public to hold forth on his theory and wrote a piece for the London Times on relativity. But he began the piece not with a scientific exposition but a human one:

“I gladly accede to the request of your colleague to write something for The Times [London] on relativity. After the lamentable breakdown of the old active intercourse between men of learning, I welcome this opportunity of expressing my feelings of joy and gratitude toward the astronomers and physicists of England. It is thoroughly in keeping with the great and proud traditions of scientific work in your country that eminent scientists should have spent much time and trouble, and your scientific institutions have spared no expense, to test the implications of a theory which was perfected and published during the war in the land of your enemies. Even though the investigation of the influence of the gravitational field of the sun on light rays is a purely objective matter, I cannot forbear to express my personal thanks to my English colleagues for their work; for without it I could hardly have lived to see the most important implication of my theory tested.”

Einstein’s message here was clear. No matter what the political environment, science should trudge on, and political differences should not be a reason to squelch scientific collaboration. In fact such collaboration may be the only bond joining two countries together when all others have failed.

Eddington and Einstein’s plea for scientific fellowship has again become relevant, even as irrational nationalism has started to rear its ugly head, in the United States, in Europe and beyond. Demagogues with no understanding of science are trying to stem the flow of scientific talent from other countries, and no nation will be hurt more by this backward policy than the United States. More than any other single country, the United States has been the beneficiary of groundbreaking work by émigré scientists; in fact, the U.S. rose to scientific prominence when Jewish scientists fleeing from fascism in Europe migrated to its shores. It rose to world prominence in diverse scientific fields like astronomy, biomedical research and social science as these European immigrants and their students, along with others who came to the country during the last few decades from Asia, Africa, Australia and other continents, massively contributed to new scientific discoveries and inventions and won a string of Nobel Prizes.

If the United States starts appearing as an unwelcome destination for the world’s scientists, doctors and engineers, not only would this be a scientific disaster but it will be a human disaster. Immigrant scientists are often fleeing from persecution, broken economies and shoddy education standards and therefore usually work extra hard to ensure that their work brings success to their adopted countries. They may not all be Christians, but as is clear from the educational attainment and income levels of so many of these immigrant groups, they often live and breathe the Protestant work ethic of hard work, honesty and perseverance. As exemplified by a letter written by the German émigré Hans Bethe to his teacher Arnold Sommerfeld, many of them come to love their country and demonstrate deep loyalty toward it. Einstein himself was of course one of the most important examples of the immigrant experience in this country; when he moved to Princeton in 1933, the center of world physics moved with him. Alienating these people would not just be antithetical to the universal fellowship of science but it would decidedly not be in the United States’ best interests; it is these immigrant scientists and engineers who have started companies worth billions, discovered new drugs, materials and species, and contributed to America's tremendous supremacy in the information age. Supporting these immigrants is in fact putting ‘America First’.

One can have a perfectly reasonable discussion on limits to immigration without keeping talent away from these shores or without alienating potential immigrants who want to succeed in this country through hard work and family values. The current political environment has erased these important distinctions, if not explicitly at least in spirit, and it’s a distinction that we need to all clearly point out. The path ahead will not be easy, but as long as we support and understand each other, as long as we organize panel discussions and conferences and exchange programs which make people appreciate the international nature of science, we will move ahead together. All we need to do is have the Eddingtons and Einsteins among us keep finding each other.
Wavefunction on Tuesday, March 14, 2017