Rutherford on tools and theories (and machine learning)

Ernest Rutherford was the consummate master of experiment, disdaining theoreticians for playing around with their symbols while he and his fellow experimentalists discovered the secrets of the universe. He was said to have used theory and mathematics only twice - once when he discovered the law of radioactive decay and again when he used the theory of scattering to interpret his seminal discovery of the atomic nucleus. But that's where his tinkering with formulae stopped.

Time and time again Rutherford used relatively simple equipment and tools to pull off seemingly miraculous feats. He had already won the Nobel Prize for chemistry by the time he discovered the nucleus - a rare and curious case of a scientist making their most important discovery after they won a Nobel prize. The nucleus clearly deserved another Nobel, but so did his fulfillment of the dreams of the alchemists when he transmuted nitrogen to oxygen by artificial disintegration of the nitrogen atom in 1919. These achievements justified every bit Rutherford's stature as perhaps one of two men who were the greatest experimental physicists in modern history, the other being Michael Faraday. But they also justified the primacy of tools in engineering scientific revolutions.

However, Rutherford was shrewd and wise enough to recognize the importance of theory - he famously mentored Niels Bohr, presumably because "Bohr was different; he was a football player." And he was on good terms with both Einstein and Eddington, the doyens of relativity theory in Europe. So it's perhaps not surprising that he pointed out an observation about the discovery of radioactivity attesting to the important of theoretical ideas that's quite interesting. 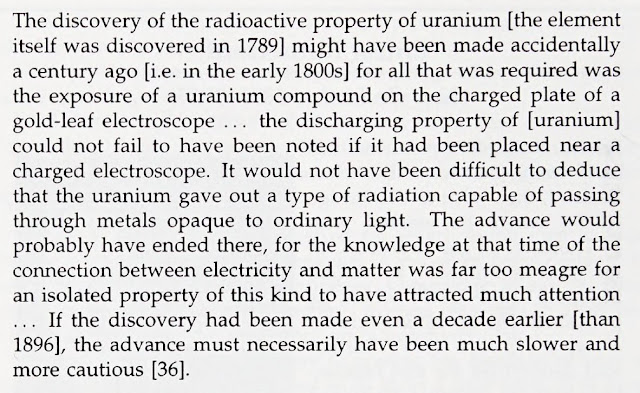 Rutherford's basic point is that unless there's an existing theoretical framework for interpreting an experiment - providing the connective tissue, in some sense - the experiment remains merely an observation. Depending only on experiments to automatically uncover correlations and new facts about the world is therefore tantamount to hanging on to a tenuous, risky and uncertain thread that might lead you in the right direction only occasionally, by pure chance. In some ways Rutherford here is echoing Karl Popper's refrain when Popper said that even unbiased observations are "theory laden"; in the absence of the right theory, there's nothing to ground them.

It strikes me that Rutherford's caveat applies well to machine learning. One goal of machine learning - at least as believed by its most enthusiastic proponents - is to find patterns in the data, whether the data is dips and rises in the stock market or signals from biochemical networks, by blindly letting the algorithms discover correlations. But simply letting the algorithm loose on data would be like letting gold leaf electroscopes and other experimental apparatus loose on uranium. Even if they find some correlations, these won't mean much in the absence of a good intellectual framework connecting them to basic facts. You could find a correlation between two biological responses, for instance, but in the absence of a holistic understanding of how the components responsible for these responses fit within the larger framework of the cell and the organism, the correlations would stay just that - correlations without a deeper understanding.

What's needed to get to that understanding is machine learning plus theory, whether it's a theory of the mind for neuroscience or a theory of physics for modeling the physical world. It's why efforts that try to supplement machine learning by embedding knowledge of the laws of physics or biology in the algorithms are likely to work, while efforts blindly using machine learning to try to discover truths about natural and artificial systems using correlations alone would be like Rutherford's fictitious uranium salts from 1806 giving off mysterious radiation that's detected without interpretation, posing a question waiting for an explanation.