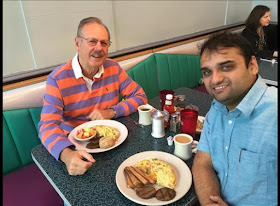 My PhD advisor Jim Snyder passed away recently from a stroke. I was a graduate student with him at Emory University from 2003-2009. Along with my other advisor, Dennis Liotta, Jim had a very significant impact on both my scientific as well as personal development. When I entered Emory wishing to do research at the intersection of chemistry and medicine, I quickly realized that I was much more suited to computational work rather than experimental work, both by skill and by temperament. Jim quickly recognized my interest in building molecular models and without hesitation invited me to do research in his lab.

Jim was a world-class molecular modeler and scientist. Although my own experience in the field is short-lived, I can say that he had the best intuitive knowledge of chemical systems and the strengths and limitations of modeling that I have ever seen. He had an almost tactile feel for forces and interactions between molecules, and while he was technically accomplished his real function was not technical; rather it was in knowing what method would work and what wouldn't, what experiments one should do next, and how one would interpret the results unearthed by modeling and simulation without reading too much into them. For him modeling was not about coding or about favorite techniques, it was one more valuable lens through which you could address chemical and biological problems. Chemical intuition was his gift, and simply by looking at a picture of two molecules interacting with each other he knew what the sizes of the atoms were, what part you could safely modify without introducing a clash, what part was essential and what part was dispensable. He exemplified semi-quantitative science at its best and knew a good model when he saw one; he especially knew that the best models are not always the prettiest ones. I have never met a molecular modeler quite like him. He was also one of the very few scientists I know who achieved high scientific success in both industry and academia, and he could transition seamlessly between the two domains: he held successive positions at the University of Copenhagen, Merck, Yeshiva University, G D Searle and Emory. He also had a very international outlook, spending time as a professor in Copenhagen, New York and Italy and collaborating with friends around the world.

The results of his expertise were communicated in more than 300 papers in top journals. They spanned a remarkable diversity of fields, from the purest chemistry to the most applied drug design, from the structure of organometallic copper compounds to the properties of anticancer drugs in the body. In each one of these papers Jim used computational techniques sparingly and combined them as much as possible with experimental data (as in the papers we wrote together combining NMR data with conformational searching). By any standards Jim’s output was prolific, and I have seen very few scientists from any field who worked on such a wide variety of topics. What’s even more remarkable is that several of these papers in top journals like the Journal of the American Chemical Society are single-author publications; they attest to Jim’s dedication to scholarship and careful attention to detail. These single-author papers are a memorable testament in an age when collaborative work is almost de riguer. I remember my own papers with him and how he stressed paying attention to every single word and sentence, even in the cover letter.

In spite of some significant personal and professional difficulties, Jim lived a life of great scientific and personal productivity. He was not only a great scientist but also an accomplished hiker and mountain climber, having made it as far as Mt. Everest base camp in the Himalayas. He enjoyed good books (Michael Shermer whose books I often gifted to him was a particular favorite), fine wine and spending time with his family, and had friends and collaborators in all corners of the world. He had some amusing favorite figures of speech which I suspect fell out of favor in the 60s or so; someone who liked controversy was no shrinking violet, you never wanted to open a can of worms, a kilocalorie or two of energy was small potatoes, and that particular approach...well, that was just a different kettle of fish. He was one of the most laid back and yet focused people I have met. He wore bright clothes to work, drove a yellow scooter or red jeep, and exuded informality and ease. And while I saw him in a tie exactly once in ten years, I have never seen him make do with a sloppy piece of scientific work.

All though graduate school and after graduation, he and I enjoyed a great working relationship as well as a very warm friendship. Whenever I visited Atlanta I used to have breakfast or lunch with him ("Always happy to 'jawbone' with you, Ash"), trading stories and looking to him for wise advice on science and life. The last time we met for breakfast was in July 2015, and the last time I saw him was after his stroke, in December 2015. Even when the stroke had affected his speech, Jim was upbeat and clearly enjoyed talking to me; I was very glad I could see him and spend an hour chatting.

Jim left me with two singular lessons which I will never forget.

One was a scientific lesson: always question the assumptions behind a scientific study or paper, no matter how elegant the methodology might be, how pretty the molecular models might look, or how famous the authors in question might be. Even the most impressive science can crumble if built on a foundation of flawed assumptions.

The second lesson was human: always take everyone's questions or statements in good faith, and always treat everyone with respect and kindness, whether Nobel Laureate or undergraduate student. Jim taught me this lesson by example every single day. I have seen him accord the same honest respect and careful consideration to beginning undergraduates as well as famous professors from Ivy League universities. For him respect did not scale with rank but remained a constant property.

I am sure Jim would have liked us to celebrate his life, so I will end with a funny and happy memory of him. We were together on a scientific trip to Imperial College in London in 2007, and were staying at a hotel in Kensington. When we went to our rooms which were on separate floors, Jim asked me to meet him in his room (say room no. 36) at a specific time so that we could head out for dinner. At the specified time I went to room no. 36 and could not find it. I looked around everywhere. Finally, in desperation, I yelled out Jim's name and heard a squeaky voice coming from - at least it seemed like - the floor. I located a very tiny hole in the floor and walked down the very narrow staircase. That's where I saw room no. 36 all by itself; to call it a room would be an exaggeration since it was no bigger than a jail cell.

Jim was sitting on the bed looking more miserable than I had ever seen him. Ash, he quipped, this is the worst hotel room I have ever stayed in. I could hardly stifle my laughter and tried to look as sympathetic as I could.

Jim Snyder touched the lives of many people in multiple ways, and his scientific and human qualities live on in many of us.
Wavefunction on Wednesday, April 27, 2016