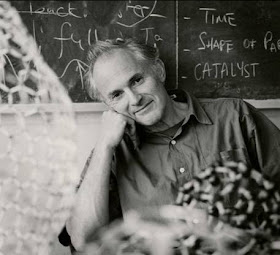 Harry Kroto who sadly passed away yesterday at 76 co-discovered fullerenes and was a passionate communicator of science. After he got the Nobel Prize, he devoted all his time to spreading the excitement of science in developing countries. Among other things he started the Vega Science Trust website which features interviews with and lectures by many famous scientists, from Feynman to Sanger.

I had a nice chat with Kroto at the Lindau Nobel Laureate meeting in Germany in 2009. At Lindau he gave a sparkling multimedia presentation that was less science and more of a paean for science. After his talk I wrote a post comparing his presentation to savoring a rich parade of treats, and I think this attitude to science characterized his entire post-Nobel career. Below I reprint the post. Harry's zest for science will be missed